Truth be said, I usually tune out at this point. Real science involves a level of speculation, the generation of theory, the testing thereof, often over an extended period of time, and often after many rabbit trails have been explored.

I write Science Fiction Adventure that leans towards Space Opera in scope in a universe where core technology is based upon a simple speculative premise: What if gravity (or, at least, the forces we now think of as gravity) has a bigger effect on things such as the speed of light than our science now believes. 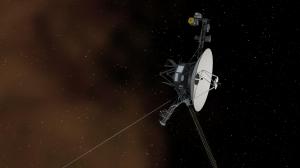 In my universe, the Voyager probes would even now be sending us material that will one day leave scientists open mouthed at what it’s done to their notions of how the universe works in much the same way Relativity blew a hole in Newtonian physics by adding whole new dimentions to our understanding.

This is all part of the fun and allure of being a Science Fiction writer, and I am not about to give it up to conform to some present day idea of what constitutes real Science Fiction.

To be blunt, the very idea of Fan Fiction makes me shiver. It’s walking over someone else’s dream, imposing your dreams onto that persons creation. I’ve never written Fan Fiction myself, and I’ve never knowingly read Fan Fiction in any form.

A few of you have just responded to my opening paragraph by thinking of the large body of works based on Star Trek, Star Wars, AD&D, and other such institutions. The vast majority of those works are not, in fact, Fan Fiction, they are Works for Hire commissioned by and with the full permission of the Copyright holders of those worlds.

This brings us to the confusion that often lies between separating Fan Fiction from inspiration. We are all inspired by something, and that inspiration will of necessity affect our future creations. I will take that a step further, without inspiration, there is no creation.

I will not go into the question of taking Fan Fiction a step further by engaging in plagiarism. At their core, the two are not synonymous, and should not be treated as such.

I realise I am going to take flack for this post, but I don’t see how it can be helped. Please, I am looking for answers, not more retoric.

I want to understand what this Occupy Wall Street movement is all about.

I want to understand who the 99% see themselves as.

But everywhere I look I see conflicting messages.

How do I separate the voices of people who have legitimate grievances from those who have gotten where they are because of there own bad choices?

How do I separate the voices of those who are looking for a way to improve the system from those who want the system to cater to their whims?

How do I separate the voices of those who are prepared to do the work from those who want someone else to do all the heavy lifting for them?

Where can I find balanced voices that will help me sort through tsumani of information this movement has spawned?

Politics is such a big subject I have decided to limit my opening thoughts to the singular question: What do the terms Right Wing, Left Wing, Liberal, and Conservative mean?

It seems you can’t turn on or read a political commentary without someone throwing out one or more of the above terms. Worse yet, everyone seems to have their own private meaning for these terms, and it’s all too common to discover a single position being tauted as an example of more than one position.

To avoid the commonalities that could muddy the waters when looking at the position called the centre, I have endeavoured to start by taking a closer look at the extremes before working my way in.

The following chart depicts my progress to date:

With these clear differences to guide me, the trip into the centre should be a cakewalk.